An important goal of learning is to improve the efficiency of an organisms interactions with its environment, thereby increasing its chances of survival. My work in the Neuromorphics Lab aims at integrating recent advances in neuromorphic engineering, computational modeling, and robotics, to design robotic agents capable of interacting in a natural environment and in real time. We are designing whole brain systems models in the MoNETA project and gradually porting them in mobile robotic platforms. Below is The Neuromorphics Lab VIsually GUided Adaptive Robot (VIGUAR), a step towards the implementation of complex based brain in mobile robotics platform.

The robot, which includes some of MoNETA basics features, explores a world of color objects. It navigates toward an object if it perceives its color as attractive based on a reward value associated with object color from the animist past interaction history. The animat also learns the locations of objects it has visited in the past in order to avoid these locations in the future exploration of its world.

This behavior was simulated using Cog 2.0 based brain that communicated with a netbook attached to a robot serial port via WiFi network (see figure below) 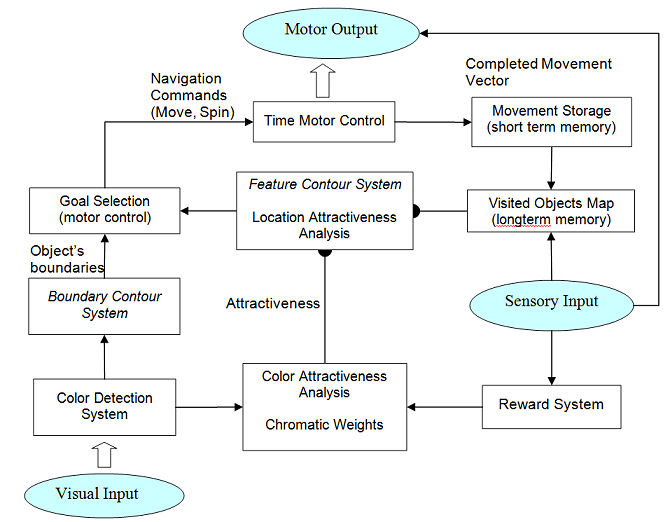 In a simplified version of a world that consists of red and green color objects of fixed size (Fig. 1), the Color Detection System converts RGB input it receives from WEB-camera into chromatic features: redness andgreenness for each location.

The Reward System receives an input from the robot bumper sensors when this contacts an object and produces a teaching signals for the Color Attractiveness Module to associate chromatic features of the contacted object with the reward.

The Boundary Contour System converts the color signal associated with each spatial location into a boundary signal. In a simplified version of ViGuAR brain the discontinuity in color features are recognized as object boundaries, which are sent to the Goal Selection System.

The Feature Contour System receives the attractiveness signal for each spatial location. These signals are gated by signals from the Visited Object Map, which block the attractiveness for the locations belonging to the objects the animat has already visited.

The commands are controlled by the Time Motor Control unit that maintains and terminates proper motor activity (Motor Output) on robot effectors.

The Movement Storage Unit updates a vector of movement of the animat upon completion of each movement. Thus, the location of the robot is constantly maintained in a short memory with respect to the initial robot position.

The high level diagram of ViGuAR (Fig. 2) was implemented as a Cog-based brain model shown in the figure below. Two independent pathways produce boundary and color attractiveness information that gets integrated by the Target Selection Module. This model reduces a two-dimensional visual RGB input to a single dimension as the robot seeks to navigate in a horizontal plane. Thus, initial two-dimensional retinomorphic representation of visual information gets squeezed into a single dimension. One-dimensional neural activity is centered to the gaze direction in a robocentric coordinate frame.

ViGuAR maintains two-dimensional space representation memory map. An active entry in this map corresponds to a spatial location that is learned as belonging to an object. This map gets projected into a robot 1D retina to gate visual signal received by the robot in the direction of its head orientation 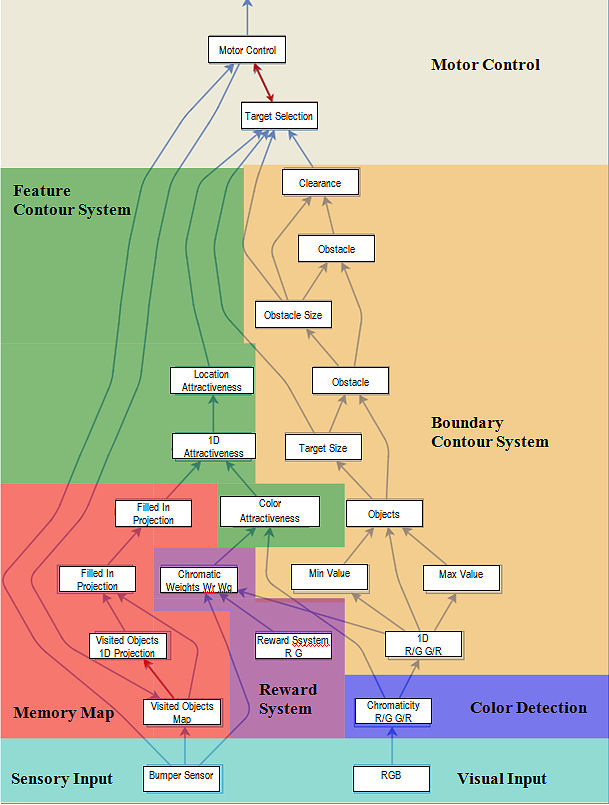 Figure The Cog Ex Machine implementation of the VIGUAR brain

ViGuAR performs a search for an attractive object by analyzing attractiveness of a particular space location. This is done independently from the object boundary determination. Once an attractive location is found, the robot orients toward it and integrates attractiveness with object boundaries determined an independent BCS system. This allows the goal selection module to determine the distance that the robot needs to travel to reach the target.

This division of labor is computationally effective in selecting goals evaluation of distance. Its role can be compared with the role attention plays in biological visual systems. Similarly to biological systems, certain locations are primed as not worthy of paying attention. In ViGuAR, this is done by the object map projection to the robot retina. This projection blocks visual signal from the locations iRobot already visited, therefore preventing the robot from reaching them.

Learning occurs upon contact with an object. On contact, the synaptic weights representing color features forming color attractiveness learn according to an external reward signal. The reward signal changes the magnitude of the synaptic weights associated with the color features of the object approached by the robot in positive or negative direction.

I am the leader of the Neuromorphics Lab, a highly collaborative lab with connections across both academia and industry.